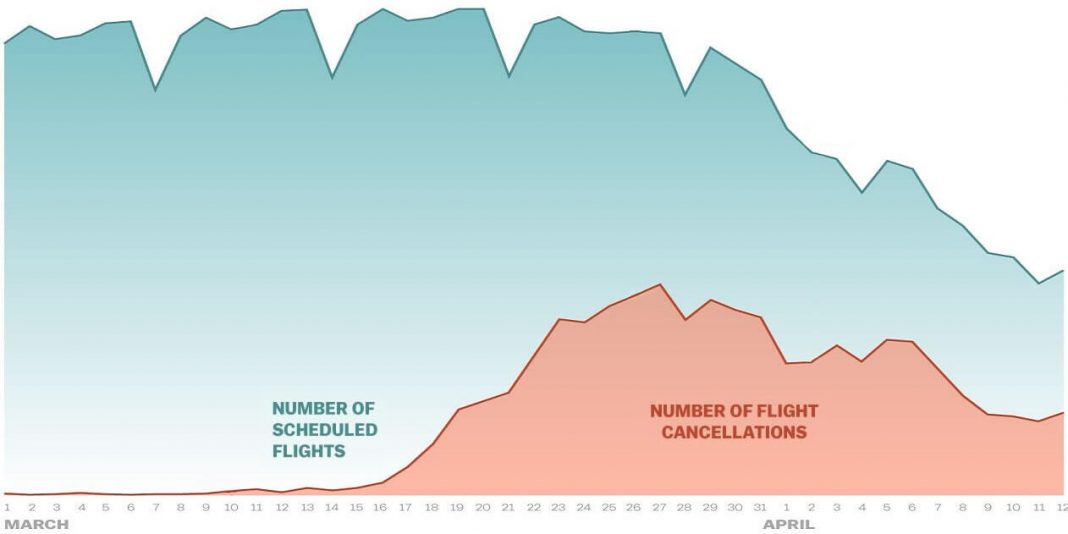 As Covid-19 impacts our Canadian economy, the one industry that was completely ground to a halt was tourism. The effect was immediate, precise, and totally uncompromising, there was no grey area or middle ground in terms of layoffs or keeping businesses open. We shall see that not only was international travel under lock down orders but also domestic travel as well.

Within weeks if not days of the international travel ban, airline after airline in country after country announced that if they did not receive some sort of government bailout, airlines would not survive. Initially governments were reluctant to provide some sort of aid but as time progressed it became clear that airline staff needed some form of support.

In Canada however both of the major airlines have not received direct support, however laid off employees did receive CERB benefits which helps mitigate the loss of wages.

If the airlines can survive, the future of air travel will be different. Travel to and from Canada will likely not happen until there is a vaccine as vacationers realize that travel insurance will likely not cover medical expenses as a result of Covid-19.

International Travel restrictions and how long will they last?

The term nonessential travel is key during these times, which basically equates to leisure travel: sightseeing, recreation, entertainment. Restrictions apply nearly everywhere still, and many countries across Africa and South America are in lockdown.

However, some countries are reopening slowly but travelers still face health screenings and in some cases a 14-day quarantine.

Certain popular tourist spots have opened, but the question is, is the country safe? While visa requirements may not have changed, travellers have to check out the latest government announcements for their destination country and whether things have changed.

Governments and airlines have indicated that it will be at least one to two years before travel will go back to pre Covid-19 levels and traveler’s spending habits will change. All inclusive vacations will likely become more popular as there will be less physical interaction with using cash. Cruising should start again, but the health restrictions will become more restrictive, passengers will have to prove their health status before they even book their tours. This will also include airlines or any form of vacation where there are large gatherings such as hotels, bus tours, and hiking groups.

While a number of international students went back to their home countries, an even larger number continued to stay in Canada. Some learning institutions still retained outside funding due to these students’ fees but as much as before Covid-19.

Although the Canadian economy was in lock down, Canada’s banking system was fully functional. Students were able to wire transfer funds and still are. September is the start of a new school year and students will be

Tourists to Canada and tourists within Canada have a lot of restrictions to adhere to even though Canada’s Covid-19 numbers are a lot lower than the USA. Canada’s borders are effectively closed to nonessential travel,but that doesn’t stop Canadians from travelling within their own country. However each province has their set of rules and one must be cognizant or they could face some form of fines or worse.

When the lockdown on international travel took place and Western economies followed suit, the currency that became the currency of choice was the U.S. dollar. Suddenly the USD became the strongest currency on the planet. Tourists who were about to go on vacation were now stuck with currencies that they couldn’t sell back to their financial institutions and even if they bought the currency back it was at a significant discount. Currency note suppliers, those that sell cash Euros, Pound notes, Mexican Pesos were unable to move their supplies.

What are the latest currency exchange rates?

Main currencies such as the Canadian dollar also experienced dramatic price movements, at the beginning of March the USDCAD was 1.3325, after the Covid-19 announcements it jumped up to 1.4667 by March 18th. It remained at those levels for a few days and then slowly dropped back down. It has taken three months for the USDCAD to come back to preCovid levels. Currently it is ranging around the 1.3350 level.

How will our economy look near term after Covid-19?